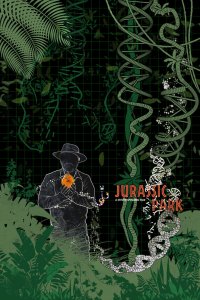 “[watching the T-Rex breaking through the deactivated electric fence] Boy, do I hate being right all the time! ” – Dr. Ian Malcolm

Brief Synopsis – A group of scientists are brought to a secluded island where dinosaurs have been re-bred in order to prove that it is safe to open it as an amusement park for the general public.

My Take on it – This is a film that has been among my favorites ever since I first saw it on the big screen when it came out in July ’93.

I actually loved it so much that I subsequently returned to see it again the following day.

This is a feat that despite my vast movie watching has only occurred twice in my lifetime; with this film and with Die Hard 2 (1990), 3 summers beforehand.

This is one of the most amazing sci-fi/action/adventure films ever filmed and it largely has to do with the fact that it was directed by the iconic Steven Spielberg.

Spielberg is a master at what he does and just like in some of his previous films like Jaws (1975) and E.T.: The Extraterrestrial (1982), he is able to tease the audience and raise the suspense level by just using visual cues and music without the need to actually show the “creature” for a long time.

The story that is presented here is so much better than the book this film is based on and stays entertaining and thrilling the entire time.

The special effects are superbly created by ILM and they were able to once again raise the level of realism in films by the innovation of their CGI technology which allows this film to truly bring Dinosaur to life in a plausible fashion.

Each of them is able to create a different kind of perspective on what is going on during the film and perhaps why.

This film allows us to see various philosophical aspects of the storyline and they are embodied in the distinct characters,

This is such a quotable film and many of the lines from it are among those quoted quick often in the movie-loving world.

This film is a classic and no matter how many inferior sequels they make, that will never change that fact especially since none of them manage to come even close to being as entertaining as this one is no matter how hard they continue trying.

This film’s musical theme by John Williams is among the best ever recorded and is extremely memorable to me.

Even after having just seen this film yesterday, I still have the urge to see it again.

Bottom Line – Amazing film that is one of the best sci-fi action/adventure films ever made.  Spielberg is a master as raising suspense level by the use of music and visual cues without actually needing to even show the monster. The story presented here is so much better than the one in the original book and is so very entertaining.  The special effects are amazing and were able to prove to the world that CGI technology was the path to the future of effects. The cast is great with Sam Niell, Laura Dern, Jeff Goldblum, Samuel L. Jackson, Wayne Knight and Richard Attenborough all giving us great characters who are quickly developed that we can understand why they need to be there and can manage to give us a slightly different perspective on the philosophical issues that one should consider when creating such an attraction. Has so many memorable quotes and is among the most quotable of films ever made.  So much better than any of the sequels that stemmed from it and I doubt any of them will mange to be as thrilling and as entertaining no matter how hard they try.  This film’s John Williams theme is among his best and most memorable IMHO.  Highly Highly Recommended!

MovieRob’s Favorite Trivia – Steven Spielberg oversaw the post-production of this film via video link while in Poland filming Schindler’s List (1993). He later called it one of the hardest times in his life as a filmmaker: the filming of the Holocaust-themed Schindler’s List took such an emotional toll on him, that his enthusiasm for Jurassic Park had almost waned. He said that he needed an hour per day to get into the right frame of mind, and muster up the energy, and patience, to comment on digital dinosaurs, and answer trivial questions from the special effects crew. (From IMDB)