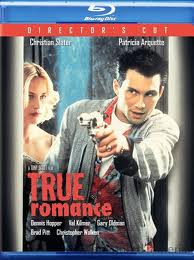 “If there’s one thing this last week has taught me, it’s better to have a gun and not need it than to need a gun and not have it.” – Clarence Worley

Brief Synopsis – Clarence and Alabama meet one night in a movie theater and their whirlwind romance takes them across the country to LA with a stolen bag of drugs.

My Take on it – Ever since I saw this movie on video back in ’94, I have always loved it. I found the characters interesting and I really believed that the story could unfold the way it did.  Quentin Tarantino sold this script in order for him to be able to make Reservoir Dogs (1992).  Tony Scott directed it and apparently he didn’t like the ending Tarantino had written, so he changed around the editing and gave it a happier ending.

For over twenty years, I wanted to see the Tarantino cut and when I recently watched this movie, I actually saw both versions within days of each other.  As much as I like Tarantino’s way of storytelling, I liked Scott’s version better. Tarantino’s version used a lot of flashbacks (like he loves to do) and Scott told the story linearly. In Tarantino’s version, Alabama comes off as less sympathetic in the end instead of staying the sweet girl next door we see in the rest of the movie. He originally planned on writing a story about her and Mr. White from Reservoir Dogs, but once the ending was changed that never came to fruition.

Bottom Line – One of Tarantino’s best written movies. Definitely go see it if you love his movies. Highly Recommended!!!