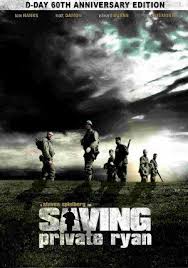 This post is part of the 31 Days of Oscar Blogathon being held this month by Kellee over at Outspoken and Freckled along with Aurora, of Once Upon a Screen and Paula of Paula’s Cinema Club.  Thanks for letting me contribute!

“He better be worth it. He better go home and cure a disease, or invent a longer-lasting light bulb.” – Captain Miller

Brief Synopsis – During WWII, a squad of American soldiers are sent on a mission to find a soldier who has been given a ticket home after his three brothers are all killed in battle.

My Take on it – Certain movies leave a lasting impression after the credits begin to roll.

This is one of those kind of movies because what Steven Spielberg was able to achieve here has yet to be match by any other filmmaker in the 18 years since this came out or for that matter in the decades prior.

The opening 30 minutes of this film shows one of the most brutal battles in history and it does so with such detail that we feel as if we are alongside these men as they fight and the bullets feel like they are flying over our heads too.

The camera work is shaky and sometimes has sand, water, blood and guts on the lens making if feel that much more realistic.

Tom Hanks was correctly cast as the commander of this squad that is sent on a very unique mission during the war and I loved how the characters constantly debated and questioned their orders, but ultimately chose to continue on with their duty as soldiers and fulfill those orders as best as they could.

Hanks is the kind of actor who is able to make us feel so much for the characters he plays and this portrayal of John Miller is no exception.

The rest of the cast was pretty much unknown at the time, but very few movie fans today wouldn’t recognize Ed Burns, Barry Pepper, Giovanni Ribisi, Matt Damon, Adam Goldberg, Vin Diesel, Tom Sizemore or Jeremy Davies and they all help us relate to their characters quite easily that we begin to care about each and every one of them which is rare for a war movie.  Usually, we get to know each of the soldiers superficially and then don’t care too much what would happen.

The story is both simple and complex and we get to learn so many insightful things about war, about people during war time, about the horrific things people do and see during war and also about what soldiers are willing to do to remain honorable in order to get back home feeling that you did the right thing as often as possible.

It goes without saying that this movie IMHO was the biggest upset in Oscar history because it lost to Shakespeare in Love (1998) for Best Picture.  They are both very good movies, but it is quite easy to see that they are nowhere near the same league of quality for a film.  I also think that history proves that this is the more powerful movie of the two.

Spielberg did win Best Director for this, so it did have a lot of support and love, but apparently it just wasn’t enough.

Bottom Line – IMHO, the biggest upset in Oscar history.  This movie was clearly the best of 1998 and is better than many of the other Best Picture winners over the years. Hanks leads an all-star cast in the (anti) war movie that has such a heart.  Rest of the (then unknown) cast is also superb. Story gives so much insight into the horrors of war and the actions soldiers must undertake in order to get back home. Amazing cinematography that makes you feel like you are right there with them. One of the most amazing opening 30 minutes of any film and it will resonate with you for a long time afterwards. Highly Highly Recommended!!

MovieRob’s Favorite Trivia –  Many veterans of D-Day congratulated director Steven Spielberg for the film’s authenticity, as well as actor James Doohan, who is best known for playing Scotty in Star Trek (1966). Doohan lost the middle finger of his right hand and was wounded in the leg during the war. Also, he participated in the invasion of Normandy on June 6, 1944, at Juno Beach, where the 3rd Canadian infantry division led the attack. He commended Spielberg for not leaving out any gory details. (From IMDB)