This is the first of 3 reviews that are part of the Inspirational Heroes Blogathon being hosted by The Midnite Drive-In and Hamlette’s Soliloquy. 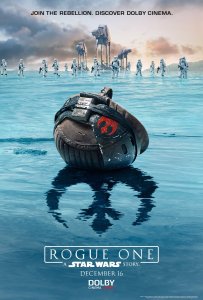 “Save the Rebellion! Save the dream.” – Saw

Brief Synopsis – The Rebel Alliance tries to find an Imperial Scientist who supposedly has information on how to destroy the Empire’s new destructive weapon.

My Take on it –  When trying to think of a film to review for this blogathon, I thought long and hard about which films I’ve seen recently that have inspired me in some way or another.

I have always been a huge Star Wars fan and have anticipated each and every one of the films as they have come out over the years.

I also read most of the books in the expanded universe (which are mostly no longer relevant) and have learned so much about the enter way that the Star Wars Universe works.

Some of my favorite characters have not necessarily been the main characters and tangent stories have always intrigued me.

This film tells us the story of how the Rebel Alliance eventually were able to get the plans to the Death Star.

The men and women sent on this daring mission are all very inspirational heroes because they do something for the greater good of the Galaxy and do their best to end tyranny.

Each of the main characters have different reasons to get involved in this fight, yet each know the potential risk and outcomes of doing so.

The story itself is peppered with the idea of hope; a hope for survival, a hope for victory and ultimately a hope for peace in a universe no longer under the rule of a tyrannical figurehead.

I loved the fact that this film ventures away from the usual ‘rules’ of the Star Wars Universe and the characters all have a dark side to them showing that even those on the side of good sometimes must do evil to reach the ultimate goal.

This also keeps things exciting the whole time even when you know what is about to transpire.

After seeing this film now for the 5th time in the last year, this film just gets better and better for me and it has been creeping up higher on my list of favorites films from 2016; it is now within striking distance of the top spot and it won’t surprise me if it eventually overtakes the lead.

Surprisingly, it is also slowly moving up the list of my favorite Star Wars films and now hovers at the edge of the original trilogy ahead of the prequels and of the two new films.

I really can’t wait to see this one again….

Bottom Line – Such an inspiring film filled with Inspirational characters.  I’m loving this film more and more each time I see it because it is a story in a world we already know yet most of the characters are foreign to us. The way that each of the main characters have different reasons for fighting for freedom helps keep things moving the whole time. The film itself is filled with the message of hope. The fact that their are no normal Star Wars ‘rules’ here in anything shown also helps keep things interesting even if you know what will eventually happen. We need more individual stories within the Star Wars Universe that don’t necessarily need to be connected directly to the main storyline. This has now been bumped up even higher on my list of favorite films from 2016 and is within striking distance of the top spot which it might end up overtaking, it is almost slowly becoming one of my favorite Star Wars films. Highly Highly Recommended!